Mesoscale and Microphysical Structure of Winter Storms Over the Northeast U.S. 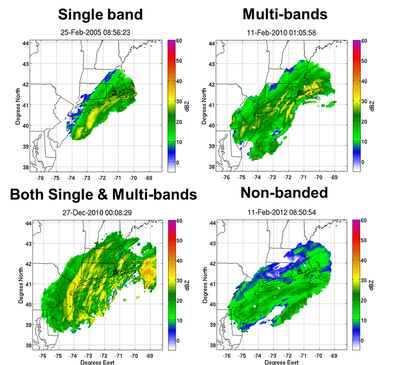 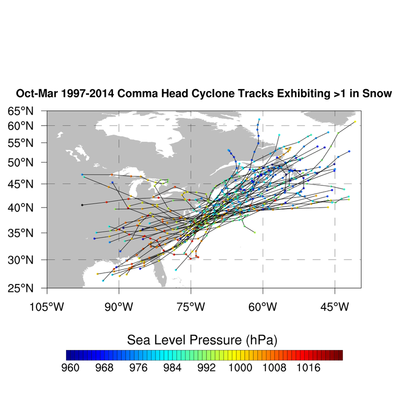 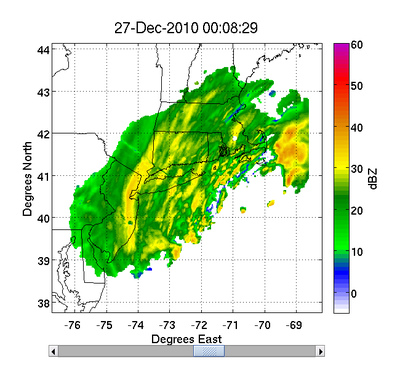 Mesoscale banding is known to affect the timing, intensity and magnitude of snowfall associated with developing coastal cyclones off of the East Coast of the United States. While much attention has been given in the literature to single-banded systems, less is understood about the dynamics of multi-banded precipitation structures within the comma head of a coastal cyclone outside of theoretical work. The East Coast event of 26-27 December 2010 exhibited multi-banded structure in which 10 finescale bands were subjectively identified embedded within the mean flow moving towards a larger primary band. Other events, such as the 8-9 February 2013 event, exhibited a brief period of multi-banding that gave way to a very dynamic primary band. Questions remain about the dynamical, thermodynamical and thus microphysical processes that differed between the two observed precipitation structures and about the relative frequency and predictability of multi-banded cases relative to cases that solely exhibit single bands.

This work aims to answer the following fundamental questions regarding single and multi-bands in the comma head region of extratropical cyclones in the Northeast U.S.:

One goal of this research is to create a multi-year dataset consisting of 50 cool season (October through March) banding events to have a dataset with high spatial and temporal resolution with which to examine the evolution of forcing and stability of the band environment for both single bands and multi-bands. With horizontal grid spacing on the order of 1 km, the life cycle of multi-bands will be investigated to complement previous work completed for single bands. By comparing data for both single bands and multi-bands, differences in the environmental stability and forcing can be determined. For example, it is hypothesized that multi-bands form as larger clusters of convection but become elongated parallel to the thermal wind to form bands and tend to aggregate into a single, larger band further downstream in a region of maximum low-to-mid-level deformation. Multi-bands may form in a region of greater instability than single bands and are the result of shallower mesoscale circulations, confined to the boundary layer, which may be the result of low-level convergence as compared to the deeper lower-tropospheric frontogenesis that is likely forcing the ascent resulting in the single band. Initially, vertical convection may generate cells which become more slantwise after latent heating may increase conditional symmetric instability that is released then released by the circulations.

Another goal of this research is to complete a process-oriented analysis using a mesoscale model run down to 400-m grid spacing for a subset of case studies to determine how multi-bands grow, develop and control their spacing. The role of generating cells aloft will also be investigated. How multi-bands impact any pre-existing single bands will also be determined. For example, Novak et al. (2009; 2010) determined that upstream convection/PV anomalies acted to weaken the pre-existing single band but if the pre-existing convection is multi-banded in nature and merges with the primary band it is unknown whether that would have the same dissipative effect.

Finally, the case studies will be used to determine the roles of diabatic processes including latent heating (condensation, deposition, freezing) and cooling (evaporation, sublimation, melting) on the evolution of single and multi-bands. Diabatic processes are necessary to maintain the convection associated with both single and multi-bands. The release of latent heat counteracts the stabilization of the band environment by the thermally direct frontogenetical circulation. The latent cooling of the environment may coincide with synoptic-scale cold air advection that may enhance the existing temperature gradient. During band formation, latent heating may play a larger role for multi-bands than for single bands because of the differences in forcing for ascent (i.e. weaker low-level convergence versus stronger low-to-mid-level frontogenesis).

Collaboration with the Cloud and Precipitation Processes and Patterns group at NCState headed by Dr. Sandra Yuter will investigate the microphysical evolution by using radar data from sites in the region especially Upton, NY (OKX) and vertically-pointing radar at Stony Brook University (SBU) as well as in-situ observations at SBU of crystal habit when available.

This study will provide a more focused look at understanding the small-scale nature and predictability of multi-bands within the comma-head of developing East Coast extratropical cyclones and shine light on their relative frequency and impact on cyclone precipitation evolution.

The Thermodynamic and Microphysical Evolution of an Intense Snowband during the 8-9 February 2013 Northeast U.S. Blizzard

The Northeast U.S. extratropical cyclone of 8 – 9 February 2013 exhibited blizzard conditions and an intense snowband to the north and west of the surface cyclone center. The snowband occurred in three distinct phases during its > 12 h lifetime. Phase 1 is defined as the time during which the band developed in an environment along a mixed-phase transition zone in an area of strong low-to-midlevel frontogenesis and pivoted over central Long Island and southern Connecticut where it remained quasi-stationary. During this phase, the environment around the band cooled to < 0°C except for a 200-hPa shallow layer approximately 75 km wide by 200 km long coincident with the snowband that remained above-freezing for > 5 h. Phase 2 is defined as the time during which the band exhibited heavy snowfall rates exceeding 7.5 – 10 cm/h with very large and varied hydrometeors. The above-freezing layer altered the microphysical character of the snowband such that radar reflectivity of > 55 dBZ was observed over central Long Island. Ground observations from the nearby Stony Brook University corroborated the dual-polarization measurements to conclude that the intense band was associated with large, aggregated hydrometeors likely growing via wet-growth processes in strong updrafts. Within 1 h, the intense and varied snowband appeared to weaken to ~ 35 dBZ and was characterized by less dense, similar hydrometeors indicative of a colder environment while still maintaining heavy snowfall rates (6.5 – 6.7 cm/h) which constituted phase 3.

The thermodynamic and microphysical evolution of this snowband has been examined to determine the dominant processes responsible for maintaining the layer of above-freezing temperatures in the vicinity of the snowband. The Weather Research and Forecasting (WRF) model was used to analyze the temperature evolution. Trajectory analysis was completed by comparing backwards trajectories launched from three thermally distinct points, one within the warm region of the snowband and two in the colder environment to the west and east of the band. The trajectory that terminated within the warmer snowband environment underwent rapid ascent during which condensation and deposition warmed the air more relative to the other trajectories before undergoing rapid descent just downwind of the band environment. A potential temperature budget revealed that although the contributions of vertical advection and diabatic heating should counteract one another, the magnitude of the vertical advection term was larger than the diabatic term which supported a warmer layer coincident with strong subsidence just downstream of the band. Finally, sensitivity tests were performed in which the temperature tendency contributions from diabatic heating or cooling were excluded separately from the model integration starting at the end of phase 1. It was found that the latent cooling did contribute in conjunction with large-scale cold air advection to cool the above-freezing layer to support the change in microphysical character of the snowband and latent heating maintained the temperature gradient, instability and frontogenesis affecting the longevity of the band.

Ganetis, S.A, B.A. Colle, 2015: The thermodynamic and microphysical evolution of an intense snowband during the Northeast U.S. blizzard of 8-9 February 2013. In press to Mon. Wea. Rev.

There have been many studies on the microphysics of winter storms over mountain ranges (Rockies, Oregon Cascases, Appalachains, but very little over the Northeast U.S. Observations of snow crystals under a microscope at Stony Brook University have been taken during the 2009-2010 and 2010-2011 winter seasons. Measurements from a vertically-pointing radar and PARSIVEL Disdrometer at the observation site,as well as snow depth and snow density measurements were taken during 13 different winter storms. These storms varied from coastal low pressure systems with a large heavy snowband (2 events), coastal low pressure sytems with no large snowband (5 events), warm advection (4 events), and cold frontal passages (2 events).

Overall, plate-like (22%), dendritic (21%), and side planes (18%) were the most common observed crystal habits on average. The riming of snow is common during these coastal events, with 62% of events having at least one period of moderate riming. The riming was largest: (1) near the strongest ascent core of a mesoscale snow band (eastern side or warm side of mid-level frontogenetical boundary), (2) when the seeder ice cloud aloft was removed by the dry intrusion, (3) small-scale convective cells, and (4) periods around freezing near the surface. During the heaviest riming periods, the snow-liquid ratios were 4:1 to 7:1, and ice fall speeds were 2-3 m s-1.  In contrast, there was little or no riming and snow ratios were 10:1 to 20:1 when the upward motion was generally weak during warm advection events. In the coastal lows with a large snow band (19-20 December 2009, 12 January 2011), rapid transitions of crystal habit, riming, and snow density were common during band evolution. WRF simulations have been run using different microphysical parameterizations including the Purdue Lin, WSM6, Thomson2, Morrison Double Moment and the new Stony Brook YLIN scheme. There are large differences in the predicted microphysics and fallspeeds within these simulations. 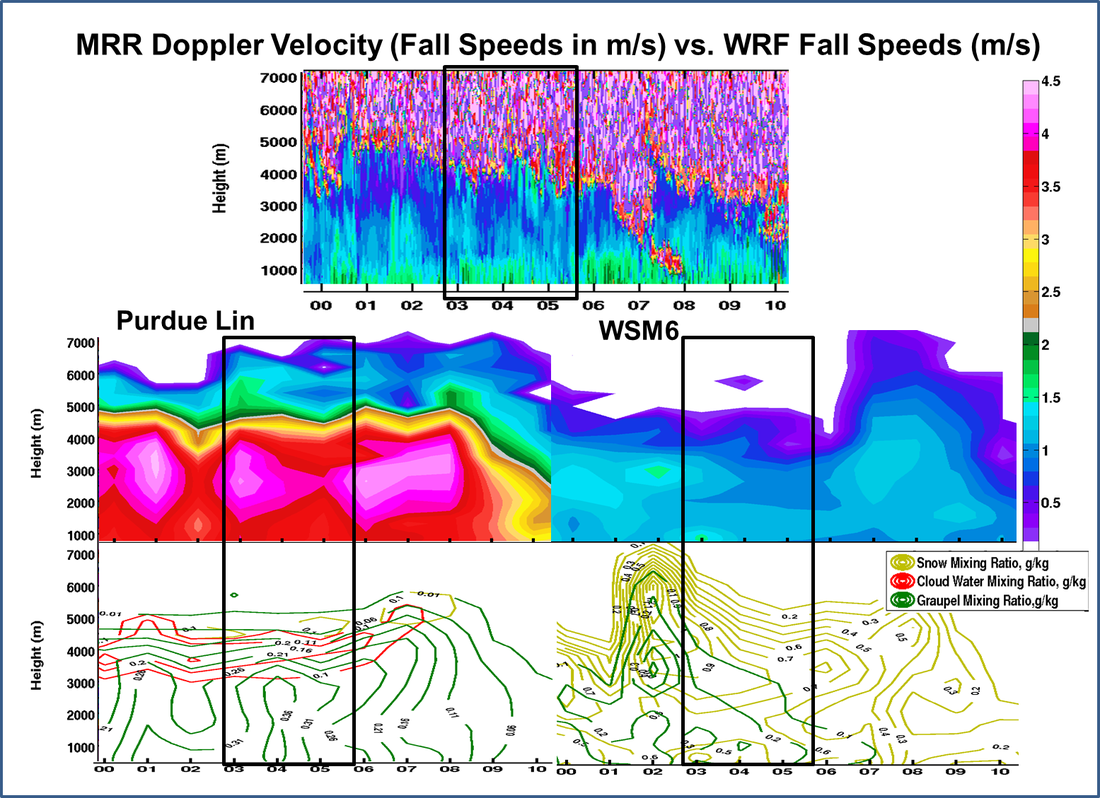 ﻿Using In Situ and Remote Sensing Measurements to Improve Snow and Riming Representations in Cloud Resolving Models
﻿
The objective of the project is to evaluate and improve bulk microphysics schemes (BMPs) utilizing the NASA sponsored Global Precipitation Measurement Mission (GPM) Cold Season Precipitation Experiment (GCPEx) field campaigns. The campaigns were carried out between January 15 and February 26 of 2012 in Ontario, Canada and resulted in a number of new data sets by collecting in situ microphysical properties and remotely sensed weather observations. An underlying premise of the study is that many bulk microphysical differences in cloud and precipitations result from the way snow and riming processes are represented in cloud resolving models.

The motivating questions are: how well do the various Weather Research and Forecasting (WRF) BMPs predict snowband intensity, structure, and microphysics? What is the benefit of using a more sophisticated double moment ice/snow scheme as well as more advanced riming schemes?

On 18 February 2012 there was a week cyclone near Lake Huron and a weak warm front approaching the field study site from the southwest. The figure below shows the 9-, 3-, and 1-km WRF domains, and the field study location (red dot). WRF used the 13-km Rapid Refresh data as initial and boundary conditions. The BMPs tested are Goddard, Morrison, Stony Brook, Thompson and WSM6. Other physics options include: YSU PBL, GD CP scheme on 9-km only, and RRTM for LW, and Dudhia scheme for SW radiation.

At 11 ﻿UTC 18 February 2012 a warm frontal snowband was observed near the field study site. All of the 1-km WRF simulations ﻿realistically reproduced the snowband, although the Thompson run was too weak. Figures below show the observed versus the WRF radar analysis.

The observed snowband was associated with an enhanced area of reflectivity (25~35 dBZ) extending up to 3km. The Goddard scheme most realistically predicted the structure of the narrow snowband, but it is about 5 dBZ too high around 2 km; There were convective cells aloft, especially just to the south of the primary observed snowband that were predicted in the Goddard and Stony Brook (SBU-YLIN) schmes; The Thompson scheme produced a relatively weak and shallow snowband. Furthermore, there was a shallow stable layer near the surface topped by a mixed layer from 950 to 800 hPa. WRF was 1-2 °C too cool near the surface and slightly too deep with the mixed layer.