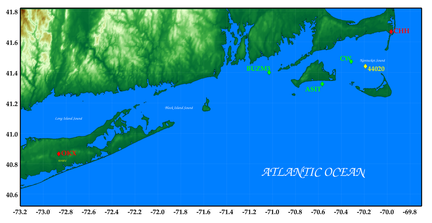 Domain of IMPOWR field observations.
The goal of the IMPOWR (Improving the Mapping and Prediction of Offshore Wind Resources) project (funded by DOE) is to improve mesoscale modeling of low-level wind fields through a combination of unique observations of the boundary layer and next-generation ensemble modeling. If successful, this would improve meteorological forecasts over the ocean, which would benefit navigation as well as offshore wind operations and day-ahead power sales. The observational campaign includes a multiyear set of meteorological and oceanographic observations at the Cape Wind meteorological tower as well as a 15-20 Long-EZ aircraft flights by UltraPure Air, LLC. The intention of this portion of the project is to measure a complete meteorological profile (wind speed, temperature and humidity) from the ocean surface to the top of the atmospheric boundary layer in addition to some turbulence and flux measurements. This work plan describes the installation of instruments on the Cape Wind meteorological tower (Cape Wind’s Licensed Property) as part of this unique data campaign.

Diurnally-forced marine low-level jets (LLJ) occur during the warm season with the synoptic pattern of a Bermuda high pressure system offshore of the U.S. East coast, resulting in enhanced southwesterly winds over the NY Bight and coastal southern New England. Two distinct LLJ cases are examined in conjunction with the Improving the Mapping and Prediction of Offshore Wind Resources (IMPOWR) field campaign. Aircraft (Long-EZ) flights were conducted through the various LLJ cores, supplying high-frequency (20 Hz) observations of three-dimensional winds, temperature, pressure and relative humidity. The two cases discussed are the 23 June 2013 case over Nantucket Sound and the 23 July 2014 event in the NY Bight just south of western Long Island. The 23 July event involved two 3-h flights, which was used to investigate the evolution of the LLJ from late morning to later afternoon. For both cases, the interior areas heated to 29 – 33 °C, while the sea surface temperatures (SSTs) were 18 – 22 °C. The LLJ was relatively weak in the late morning (~10 m s-1), but by mid-afternoon the magnitude of the LLJ approached 20 m s-1 between 150 – 300 m AMSL.

This IMPOWR dataset can be used to verify these LLJs and low-level thermodynamic structures within a mesoscale model, and it provides a dataset to document the three-dimensional evolution of these LLJs. The Weather Research and Forecasting (WRF-ARW) model was used to simulate these LLJ cases down to 1.33-km grid spacing using the NCEP Rapid Refresh analyses for initial and boundary conditions. Both sets of simulations used Thompson microphysics, Dudhia shortwave radiation, and no cumulus parameterization, while several different PBL parameterizations were attempted. This study will focus on comparing the non-local first-order YSU and local TKE-order MYJ PBL parameterizations. The structure of the momentum, thermal, and turbulence fields were compared between model and observations for several flight legs and for vertical profiles from 20 – 30 m above the surface to about 1000 m. Preliminary results show that the WRF-simulated LLJ was both too weak (~3 m s-1) and too shallow (~50 m) for the 23 June 2013 case. Additional WRF simulations tested the effect of prescribed sea-surface temperatures to show that, while the depth of the marine atmospheric boundary layer (MABL) and strength of the inversion depends on SST, the LLJ magnitude is not as sensitive to uncertainties in the SST field as the atmospheric initial and lateral boundary conditions used in the simulations.